“It’s the worst it’s ever been,” said Tony Griese, a Bridgeport resident who has been a cabdriver since 1993. “Anyone and their grandmother can become a driver for Uber [and Lyft] and there are only so many rides to give in this city.”View Full Caption

THE LOOP — The last few years have been tough for Chicago cabdrivers, but no year has been worse than 2017.

Between January and July, the number of people taking cabs in Chicago was 41 percent lower than in 2016, city data shows.

That decline is far steeper than in previous years. Cabdrivers say the decline has been happening since 2013, when ride-share services like Uber and Lyft began operating in Chicago, and the negative effects have multiplied over time.

“It’s the worst it’s ever been,” said Tony Griese, a Bridgeport resident who has been a cab driver since 1993. “Anyone and their grandmother can become a driver for Uber [and Lyft] and there are only so many rides to give in this city.”

In July 2014, when ride-sharing was in its infancy, Chicago cabdrivers gave 2.6 million in rides, raking in $32.3 million in fares.

About 15,000 people are licensed to drive cabs in the city. The number of cars that have been permitted to drive on behalf of Uber and Lyft is in the hundreds of thousands.

Taxi advocates say those numbers are pushing drivers off the streets. So far this year, 900 taxi medallions have gone into foreclosure, according to the cabdrivers union.

Officials with the city’s Department of Businesss Affairs and Consumer Protection, which oversees the taxis, say they have noticed a drop in rides though note that some companies might not be reporting their trip data entirely. Based on the number of cabs taken out of service, the city thinks the drop might be around 25 percent.

“The ridership numbers are devastating, but this is what we are seeing, and this is what the drivers are feeling,” said Tracey Abman, associate director of Cab Drivers United AFSCME Council 31. “The problem escalates dramatically when you provide an unlevel playing field for ground transportation.”

Ald. Anthony Beale (9th), an advocate for Chicago’s taxi industry and the head of the City Council’s transportation committee, has pushed for more regulation of Uber and Lyft.

Recently, he drafted an ordinance requiring ride-share drivers to be fingerprinted and limiting surge pricing that companies use to increase fares when ride demand is high.

Although ride-share companies are “making consumers go for the convenience,” they don’t contribute to Chicago the way taxis do, Beale maintains.

“The cab industry is a different experience. Cabdrivers are ambassadors to the city. They know the city. They talk to you about the city,” Beale said. “You aren’t going to get that with Uber and Lyft.”

“The reason that Lyft has been successful and grown rapidly in Chicago is not just because we offer a safe, affordable and convenient service,” Lyft spokesman Scott Coriell said. “It’s also because we have opened doors of economic opportunity for tens of thousands of people.”

Charity Jackson, an Uber spokeswoman, agreed: “In just five years, ride-sharing has created flexible earning opportunities for tens of thousands of drivers across Chicago and helped millions of riders get from A to B in neighborhoods that were previously underserved by taxi.”

Griese and other taxi drivers are sticking with the industry.

Khalid Rashid, a West Ridge resident, became a Chicago cabdriver only a year ago. Though he notes “business is very bad,” he said the job is worth it. 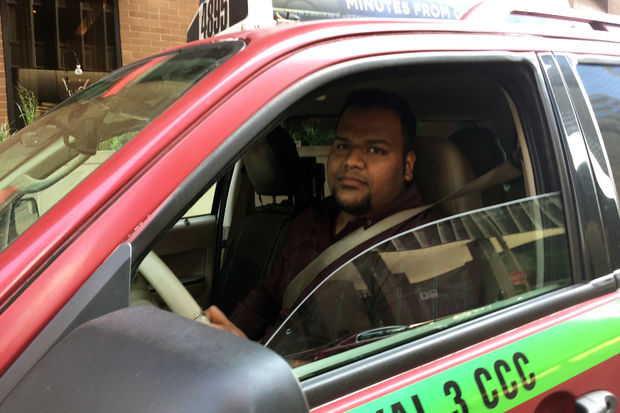 “Being a cabdriver is a profession,” Rashid said, comparing himself to ride-share drivers.

Griese said he has looked into becoming a ride-share driver, but “the math didn’t work out” to being better than leasing a taxi. He prefers the 12-hour-a-day, seven-day-a-week grind of driving a taxi.

“It gives me the freedom of setting my hours,” Griese said.

Griese said that there’s one thing the city could do that would save Chicago’s cab industry: “Get rid of Uber and Lyft.”

Want to join the discussion?
Feel free to contribute!